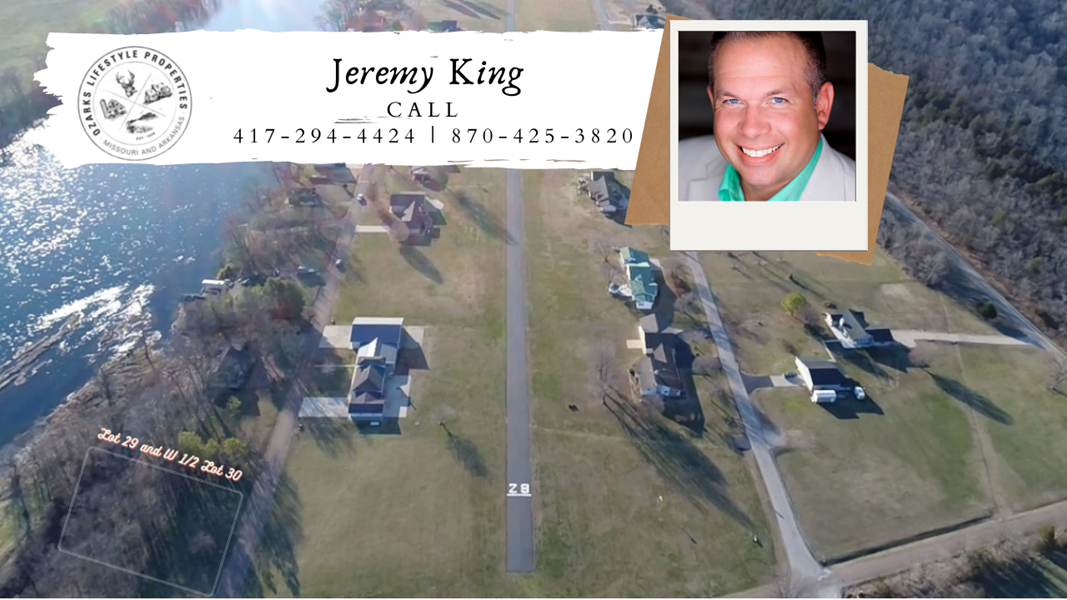 Description: A Pilot’s and Fisherman’s Dream, Nestled in the Arkansas Ozarks, on the White River.  This lot and a half property is located in beautiful Cotter, Arkansas. Also known as “Trout Capital, U.S.A.”.  Aside from the Amazing River Views the property has many amenities in and around the area, including private community airstrip and boat ramp.  A private community where you’ll be surrounded by other aviation and fishing enthusiasts. This flat, build-ready lot comes with well and electric already installed and is just waiting for the home of your dreams to become your reality— don't miss out on this one!

Mountain Home has been named one of the best places to retire in America by Rand McNally and AARP. Whether moving to raise a family, or to enjoy the golden years, Mountain Home is a welcoming community with much to offer. Our serene setting in the Ozark Mountains gives the perfect backdrop for enjoying life at a slower pace. Not only is Mountain Home rated as one of the best retirement cities, it has also been rated as one of the best places to fish by Field and Stream and to enjoy outdoor sporting by Outdoor Life. As of the 2010 census, the city had a population of 12,448.  Mountain Home is located in northern Arkansas. It is the center of the Twin Lakes area, with Norfork Lake 15 minutes to the east and Bull Shoals Lake 20 minutes to the northwest. It is located within the Ozarks mountain range, in the Salem Plateau region. The city is located within 15 to 20 minutes of three rivers: the Buffalo National River, the White River and the North Fork River, which features the world-renowned Norfork Tailwater. These make the Mountain Home area one of the nation's top freshwater fishing destinations. Some creeks in the area with fishing access are Fall Creek, Dodd Creek, and Hicks Creek, with Fall Creek being the largest.